Always searching for new music and new bands. And so one day I saw a band called HEXED on YouTube. I had never heard of them before but when I saw they came from Sweden I knew it must be alright. I sometimes think that everything that comes from Sweden must be alright (talking about music and the people). And I was right again. Again it sounds great,  so I decided to check them out.

I asked them some questions so we can learn something more about this band. And I’m very grateful   to them for answering my questions.

I am always curious about band names. Why do they choose for a particular name and is there a story behind the name. When I saw the name HEXED I thought immediately about witches and witchcraft. But that’s because the name sounds like the Dutch pronouncing “heksen”. But it’s probably Swedish so let’s  ask the band what it means.

The name HEXED is a name that suits with the image of the band and also the music and the lyrics we use. So is Tina telling us.

I’m very interested in the human mind, occultism and the unknown mysteries of life. And it’s also a kind of tribute for those who didn’t survive the witch hunt and the witch trials in Sweden during the period 1668 – 1704. So history will not be forgotten.

We as a band aim to hex people with the stories we write about and who we are as a band. The lyrics are written from modern life and in metaphoric sentences, so the listeners can relate and make the songs their own.

So once you’ve listened to our music and lyrics we hope you get the vibe! Explore the unknown and be HEXED.

So now we know what the name HEXED means and that’s a message in it. But who came up with the name?

Stellan and I (Tina) thought of various names and different logotypes. We came to the conclusion that HEXED was a name,  we were all okay to be associated with.

How long does HEXED already exists? When was it established?

HEXED existed for 3 years now. We started as a band with only four band members. And the only change we made so far is that the drummer, who is the drummer on the record, became our second guitar player, along with Stellan.

That was a great solution, al the music for the album has two recorded guitars, and we found that also necessary for our live gigs. Because of that we recently became a band with 5 bandmembers, with a great new drummer called Simon Aspsund. A really amazing guy with lots of talent and a perfect musician for our line-up. You are lucky because it’s just about to be official news!!

Can you tell us something more about the history of the band? You already told us something about it but maybe there is more you want to tell us?

When we started out to make music and got the idea for this project, we soon found out this was just something we could build on. But we knew that we had to find the right musicians for it. Pretty  soon the other band members were found and HEXED.

We already heard a few names of band members. Can you introduce them to us?

Thank you for introducing the band members to us. Can you tell something more about them, maybe something about their musical backgrounds?

Tina: “I was fortuned to grew up in a family where music was always been an important part of life. I started singing at an early age and from the age of six I loved to go on stage and perform. I liked all kinds of music like country, rock, blues and then I discovered heavy metal, and I was sold to it! Some of the bands I’ve played in are  Nebraska, Mellow Poetry and Detained.

Stellan had a solo project for a long time and also had a band called Bacchus. He is a composer and a producer of a lot of great music in all kinds of metal. He is also bass player in a new band called Fuel For Nightmares.

Teddy is my brother, he grew up with me, so we had the same childhood. He does a lot of music and plays in several bands like Loch Vostok, Anima Morte and Satans Kadaver. And earlier the drummer of F.K.U.

Daniel is bass player with his musical roots in both punk and metal. He played in bands as Biomasticator, Them Tyrants, Zionide and many more.

Simon has gone to musical study’s since early age. Goodfellas is the only band that he had earlier played in officially besides HEXED. He is very intense in his practice and is always delivering his best to the band.

Are you all fulltime musicians?

No, all of us have also regular jobs and are working fulltime. The rest of our time we spent on music and family. We wish it could be different but none of us has had the opportunity to make music for a living.

How will you describe the music of HEXED?

Our music is a genius blend of thick driving rhythms, melodic guitars and is sometimes progressively orientated. But always with catchy chorus lines and strong powerful female vocals.

Can you tell us something about your album “Netherworld”?

We released our debut album Netherworld on March 30 this year and the album had been ready for almost a year as we searched for a good deal and the right record company for the release. We had several suggestions and Thomas at Vicisolum Productions was the one we chose for the release. 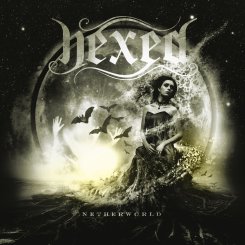 Netherworld contains 10 tracks and the title track gives a message to never give up. How dark it may seem to be, there will always be good times to rise again. It came up as we struggled with the loss of our parents and a couple of friends who died shortly after each other and then I was writing a lot of existential lyrics from life itself.

What was your best performance so far?

That was the gig we just had, the release of our album “Netherworld”. It was a blast and we had so much fun doing it.

When can we say “welcome HEXED in our nice country Holland, and can we invite you to drink a few beers with us”?

Hopefully soon! We are working on it,  and yes, that would be a great opportunity to meet each other.

What are the future plans for HEXED?

Our future plans are to get out everywhere as possible and do live shows as much as we can. And we want to write new music for a second album.

This question might be a bit difficult to answer maybe. But why are you always so happy? We had contact a few times now and I read articles about the band and it’s always so nice to see how happy you guys are.

Most of the time we are happy people. It’s natural for us to interact and give good news about the things that are happening around us and give a positive vibe as we are optimists in our nature.

I want to thank you for answering my questions and take the time to do so. It was great to do and I learned a lot about your band. And now you can ask me, are you HEXED already? The answer is yes. I’ve listened to your album “Netherworld’ several times, and yes I’m HEXED. It’s a beautiful album with 10 tracks which are all different and that makes the album complete. I love the music and I love the lyrics. It’s an album with a message to us all. The joy you have in life is the joy I hear on the album. So I hope to see you soon in Holland so we can hear and see you perform live and get us all HEXED.