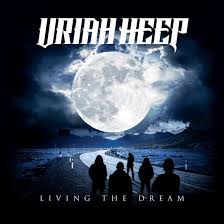 A long time ago when I started to like heavy metal there were two bands I liked most. Of course there was Deep Purple and…..Uriah Heep. And the first album I bought was ‘Uriah Heep Live’. It was something complete different then ‘Deep Purple’. ‘Uriah Heep’ was the band with the typical ‘Heep Sound’.

When they started the band had the following band members:

And now half a century later there is still the ‘Heep Sound’. The band had a lot of different band members during the years and they released more than 40 albums, but the sound still exists.

The band released their lasted album ‘Living the Dreams’  last Friday, the 14th September. And it’s sounds like nothing has changed in all those years.

The current band members are:

Listen for yourself and find out that the ‘Heep Sound’ will last forever.