‘In Silence’ is another talented band from Karlstad, Sweden. Thanks to Kingart Music I had the opportunity to ask this band a few questions, so we can learn something more about them. So let’s hear what they have to tell us.

The band is called ‘In Silence’. Not a common name I think for a metal band. When I translate it in Dutch it means ‘not much noise’ but I think there is some noise in your songs. Can you tell me something about the name.

We didn’t start with this name. Before ‘In Silence’ became the official name we had a different name. But our bassist Mikael came up with this name one night while we were sitting together and had a couple of beers. And it just felt right, it’s original and easy to remember.

Can you tell me something about the early years of the band? When is the band established? Who came up with the idea? And how did it started?

‘In Silence’ started about three years ago with Sebastian, Mikael, Erika and Rasmus. Daniel came to the band at the end of summer 2018.

We all had played in different bands before, but it didn’t feel right. We met each other and talked. So we decided to start ‘In Silence’ and it felt right from the minute we started.

Can you tell something more about the band members? With instruments they play, musical backgrounds etc?

On vocals we have Erika (Rejka) Jonsson. She is the crazy, energetic person in our band. She has gone to the “Nordic Rock Music School”.

On bass we have Mikael Larsson. The humorous go-getter who played drums before he took his role as bass player in ‘In Silence’.

We have Sebastian Elmlund, the calm psychologist, on lead guitar. He has an education in classical music.

On drums, Rasmus Engstrand, the skeptical and unlucky guy. He has a “light and Sound” education.

And finally on guitar, we have Daniel Delin, the humble young guy. He is self-taught. 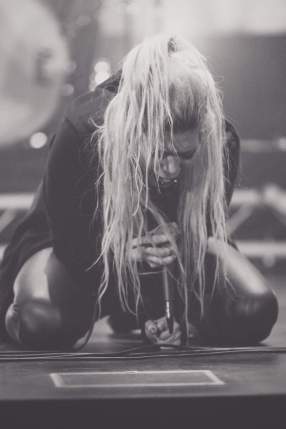 How would you call your music? I read on FB that that you like bands as FFDP, In Flames, Arch Enemy, Trivium and……Unleash the Archers. But can we hear it in your music?

We play Modern Melodic Metal. Some people may think we sound like some other bands but we try to be original and make music from the heart.

I’ve listened to a few songs on Spotify and can you agree with me when I call your music ‘In Silence’? I mean that you have your own remarkable sound?

A big YES! That’s what we are trying to achieve.

When people read on FB ‘modern melodic metal with an unique twist’, what is the unique twist in your music?

The unique twist in our music is that we mix different genres. In general we make the music just the way we like it most. Right from the heart, like I told you before.

Have you made any records yet? And so yes, can you tell something about them?

Until now we released 1 single and 1 demo single. And right now as we speak we are recording a couple of songs that will be released later this year (2019).

Who is responsible for the music and who writes the lyrics?

Mostly the guitarists are responsible for the music and Erika comes up with the lyrics.

Is there always a curtain messages in your songs?

Yes, we try to have a message in the songs we create. It’s about “standing tall and be proud of who you are”.

I saw also that you have been on  the “raise your fist for metal festival”. Can you tell something about that festival?

“Raise Your Fist For Metal” was a lot of fun and also a learning experience. The festival was nicely arranged and it was great to play with some big bands like Freedom Call and “Hulkoff”.

Are there particular gigs you have done which were (very) special?

Every gig is special in its own way. But there are a few I will mention: “Wacken Metal Battle 2018”, “Backstage Rockbar” in Varberg 2018 and “Eidskog Rockeklubb “ in Norway.

They all generated new contacts and exchange of ideas….But we don’t know what the future holds, maybe the best is yet to come.

Your from Sweden and there are a lot of metal bands in Sweden. What makes you different from other bands?

What separates us from other bands in Sweden is that we don’t have the “Sound of Gothenburg”. We try to be unique in our own way with a female singer that doesn’t sings opera or growling.

Why did you chose for Kingart Music?

We heard very good things about them, and checked them out. They know what they are doing. And hopefully they can help us reach out to the world.

What are your future plans? Gigs, records etc.

Our future plans are releasing new song, make some music video’s and do everything we can do to go to other countries and spread our music.

Is there a possibility when can see and hear you in our country?

Of course! We would love to come and play for you…invite us…..and we will come.

Is there something you want to tell to my readers?

Sure! Stand up and help each other. Join the In Silence Family, Love and Metal!!!

Een gedachte over “IN SILENCE”