It’s Thursday 30 April and today I’m going to Breda to see and hear three bands. Two of them are new, ‘Blackdraft’ and ‘Astrey Valley’. The other one, ‘Secret Rule’, I’m going to see for the fourth time. So, after a very quick dinner om my way to “Sound Dog”, a venue I haven’t been before. But the pictures look great so nothing can go wrong. And today I don’t have to drive by myself, I can go there with Ton. But after a few kilometers there a traffic jam so I hope we can get there on time. 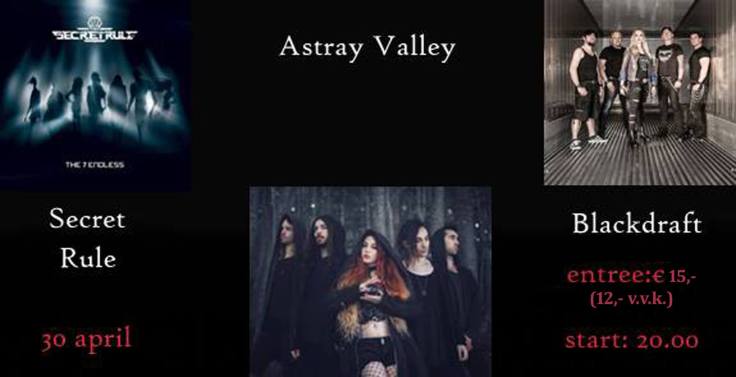 Where are the metal lovers?

And yes, we made it. We are just on time. Insite I first say hello to a few friends who are also here this evening to enjoy the three bands. But again, there are not many. I’m even a little bit sad about this. This same day I read that metal music is the genre that’s growing most of all kinds of music, but I can’t say that I can see it when I go to concerts. But maybe I always go to the wrong places. But most I’m sorry and feel sad for the bands. They are doing everything to bring their music to the people, but people are more interested in other things. And maybe it’s because it’s Thursday and people have to go to work the next day, or the football game which is on tv this evening, I really don’t know. But let’s focus on the bands with are here this evening.

The first band on stage this evening is ‘Blackdraft’. The band is from Germany and they play “straight metal” as they say. I never heard of this kind of metal but when I looked it up, I understand what they mean by it. Everything from hard rock to death metal makes straight metal. So, let’s try if I can find out by listening to their songs.

And I think I do. I can say I like the music they make. I very listenable and it’s a joy to see the band on stage. The band has already released two albums, “Recipe of Pain” and “The Quest” and they do songs of both the albums. With Julia Wallenius (lead vocals), Karsten Wallenius (lead-guitars and growls), Tomasz Kolonko (bass), Jan-Hendrik Köbel (drums) and Fabian Adler (rhrythm guitars) they did a great performance and I’m glad I have the opportunity to see them on stage.

‘Astray Valley’, formed in 2014 is from Barcelona. They play modern metal and are something complete different then the first band I saw on stage. A little bit more brutal, more power and much heavier. And I have to say, you like this music or not. And I have to say that I like it. It’s just the right mix between the two other bands this evening. And it’s shows again how many styles of metal we have. 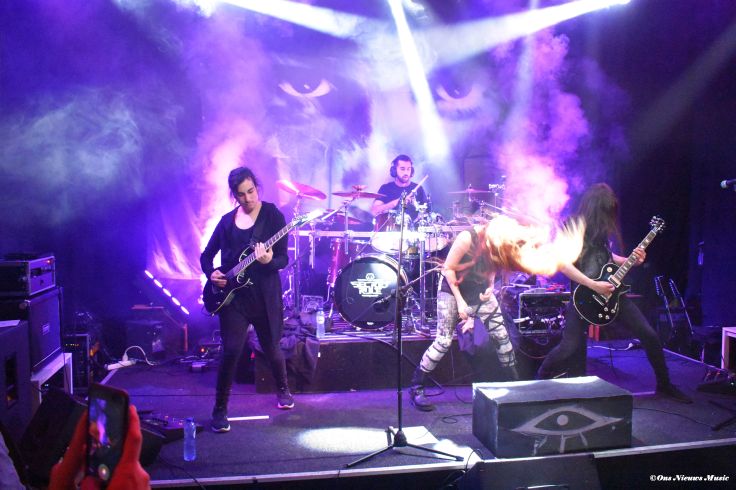 I have to be honest, there are not so many bands from Spain I like, but this band I will follow for sure. With Clau Violette (vocals/screams), Joan Aneris (guitars), Adri Funerailles (guitars), Jorge Romero (bass) and Unai Splinters (drums) it is a pleasure to see and hear them.

Time for the headliner of the evening, ‘Secret Rule’. The band just released a new full-length album, “the 7 Endless”.  It’s the 4th full length album of the band. So that’s why this tour is called “The Endless European Tour”. So, I think we can expect a lot of songs from this new album.

The album “The 7 Endless” is based on a comic book, “The sandman” by Neil Gaiman, and tell us about 7 endless (dream, death, delirium, desperation, destruction, desire and destiny). You can read all about this in the interview I had with the band some time ago and which you can find here: 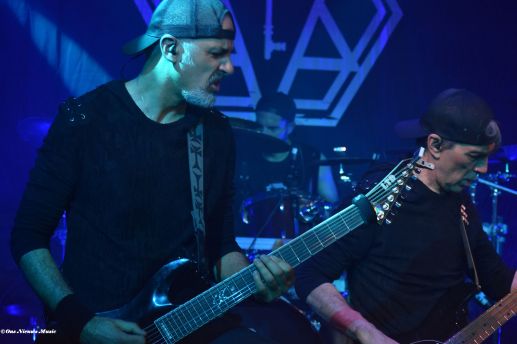 And yes, they play a lot of songs of the new album, but also a few from the other albums. And how nice it is the hear their very first song, “I don’t wanna be”. And of course, there is  “The song of the universe”, the opening song when they performed at FemME and in Gorinchem last year. But this show they started with “Desperation”.

It’s again a show with lots of power. With Angela di Vincenzo (Vocals), Andy Menario (guitars), Nicola Corrente (drums) and Michele Raspanti (bass) it’s a party. And how can you see we have a party? When people will start with “de polonaise” they sure have a party. And even think this is the first time I saw “de polonaise” at a metal concert. So ‘Secret Rule’ can try to get this into “The Guinness book of records”

I will end this review by saying that I have most respect for the three bands this evening. They have given their best although there were not so many people to watch them. It’s not easy to get motivated when you have to play on an evening like this. But you did very well and you gave the best for us. So be proud of yourself! We appreciate what you’re doing and I have enjoyed every minute of the show.

So thank you Backdraft, Astray Valley and Secret Rule.