This year there are FemME Battles again with preliminaries in the UK, Belgium, Germany and the Netherlands. And I will introduce you to the bands which go to the Finals. I will do so by asking all of the bands the same questions. So, you have the same information about all the bands which are in the Finals.

The next one is ‘Meridian4’, winner by jury of the “Belgium Battle”.

Thank you very much ‘Meridian4’ for answering the questions.

First of all, can you tell us something about the name of your band, ‘Meridian4’? What does it mean and which one of you came up with this name?

Our name represents the place where everything has begun. Located on the 4th geographic meridian east from Greenwich; Brussels!

It’s that simple! The original choice was made by the 4 first members of the band, Sam, Caro, Hugo and Morgan. And confirmed by Wobi and Anthony when they joined us. 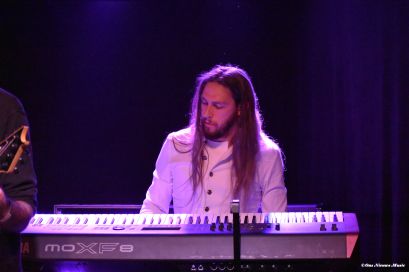 What can you tell us about the history of the band?

The band is born in 2016, from the will of 4 friends to create the kind of music that makes us vibrate, blending the energy of metal music with the power of symphonic orchestrations, softly spiced up with progressive flavor.

We all love the song writing of mythical bands such as ‘Dream Theater’, ‘Opeth’ or ‘Pain of salvation’. And on the other hand, classical orchestrations as used by ‘Symphony X’, ‘Fleshgod Apocalypse’ or ‘Epica’.

We started of as 4 musicians, but our friend Wobi joined us very quickly, followed by Anthony with whom we had a really good connection from the beginning. 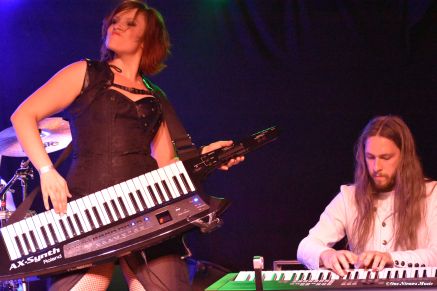 Please introduce yourself to us. Who are you, which instrument(s) do you play and about your musical background?

Meridian4 is formed by 6 musicians: Sam and Anthony on the guitars, Wobi on the bass, Caro does the vocals, Hugo on keys and Morgan on drums. Not all of us had a musical education at the beginning, but we all had to learn basic (and then less basic…..)music theory to be able to take part in the composition work.

Besides this, all of us used to play in different bands before: “Asylya” (Anthony), “Anwynn” (Wobi), “Khaleesy” (Sam, Hugo, Caro and Morgan). So, we are not really complete beginners.

Which one of you is “responsible” for the songs (lyrics and music)?

All our songs are the result of a collective writing process. Usually, Caro comes up with a strong structure built on the basis of Sam’s riffs, (this guy is a real’” riff factory”, not kidding), and Morgan’s rhythm patterns. Sam and Anthony add their ideas for solos, Hugo develops the symphonic orchestrations, and Wobi and Morgan work on the overall arrangements. For the lyrics, we usually start from a basic story written by Caro, corrected by Morgan and then re-written by Hugo…..so simple!

Did you release any records already and can you tell something about them?

“Collateral” is our first EP. It was recorded in November by our friend Jullien Huyssens from Nomad Studio and will be released very soon on June 8th! This EP features more than 20 people in an epic choir.

We’re really proud of the work that’s been achieved for a first record, and we’re really exited about the release! We hope people enjoy listening to the songs as much as we loved writing them.

In 2018, we released our first single, “There Will Be Light”, that’s available on YouTube. And the big event for us in 2019 is definitely the release of “Collateral”! We’ll have a gig with ‘Skeptical Minds’ in Brussels (Garcia Lorca) on June 8th to celebrate the event. You’ll be able to find it on Spotify, Itunes, Apple Music, Amazon, pandora, Deezer and more, and we also can personally send you a physical copy if you contact us directly via our Facebook page (https://www.facebook.com/meridian.officiel/).

“Collateral” is a 30 minutes concept album with 5 songs, telling the story of a young Middle-East refugee who became a famous boxer in Europe, despite and because of what she went through in her past life.

Are you full time musicians or do you have other jobs also?

So far, Caro is the only one of us who’s living from music (Utopie, Music School, Brussels). The other ones are scientists, engineers and accountants.

Can you describe your music? How would you call it?

As many bands these days, our music is not strictly limited to one genre. We would describe it as progressive metal with symphonic orchestration, powerful vocals and abrasive guitars. But the best way to make up your mind is to listen to our releases!

Are you influenced by other bands? And if the answer is yes, which one(s)?

Our big general influences come from the bands mentioned earlier in this interview. So, there are ‘Dream Theatre’, ‘Symphony X’, ‘Opeth’, ‘Pain of Salvation’, ‘Epica’, ‘Fleshgod Apocalypse’, to name a few.

We also have been impressed by some newer bands like ‘Fractal Cypher’ (Canada) or ‘Ancient Bards’ (Italy), who helped us to defining what we really loved in different styles of music.

What was your most cool gig so far?

Hummm…..this is a hard one! We enjoyed every single gig that we gave so far, so maybe we’ll say that the coolest one for us was the first one, in Seraing in 2017. It was actually a gig that we gave for Hugo’s birthday, surrounded by friends and family, with no pressure, food and drinks all around. But Sam liked our show at “Bar les Anges” with ‘Cathubodua’ better. Anyway, it’s hard to make a choice.

Is there a band you want to go on tour with? 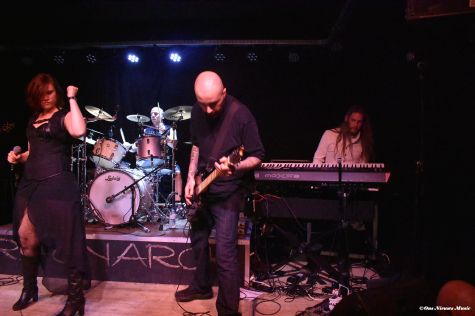 What do you think of FemME?

For us, it is a great honor to perform in this event, first because it gives the opportunity to value the place of women in metal. This kind of festivals promotes the visibility of metal bands with female musicians, in very different genera. But also, it was very exciting for us to discover the experience and dedication of all people implicated in the festival.

We really loved the atmosphere, full of respect and comradeship – even between the bands – and despite the underlying competition. Obviously, everyone in the organization puts all their heart in what they do.

Are you looking forward to come to The Netherlands?

Of course! This will be our first gig in the Netherlands, and we heard that Dutch metalheads are absolutely crazy. We’re looking forward to play for them, and we’ll surely do our best to live up the expectations!

Is there anything else you will tell us?

Yes! You ca stay updated to our news and gigs on our website www.meridian4.be  And we’ll have a lot to share during the following weeks, starting with our first videoclip (“Earthquake) which is just released.

And thank you so much for giving us the opportunity to answer your questions. See you at the finals!