The Swedish band ‘Egonaut’ releases today (may 24th) their latest single called “Omens”. If you want to know all about this band just read the interview I had with the boys.

First of all thank you very much for giving me the opportunity to ask you some questions! 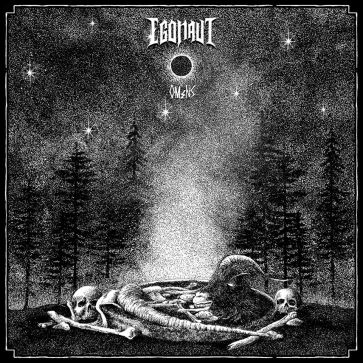 I think the band ‘Egonaut’is a new name for some people in the Netherlands. So please can you introduce yourself to us? So who are the bandmembers, which instrument do they play, former bands, etc?

When I’m right the band is from 2005 (I hope I’m right). Can you tell me something about the history of the band?

The band was formed by me (Fredrik) and drummer Markus as a side-project with the sole purpose of playing some cool seventies style stoner-metal. Since then we’ve managed to produce four EP´s and four full-length albums as well as a couple of tours around Europe, among others opening for ‘Big Elf’ and ‘Hamferð’. We have also throughout the years managed to play most of the big festivals in Sweden.

Are you full time musicians?

No, we all have jobs on the side.

The 24th of may you release a new single called “Omens”. What can you tell about the single.

It is a prequel of some sorts for the storyline/concept of our forthcoming album, written by Fredrik and it is meant to set the tone both musically and lyrically for the album.

A new single means most of the time that a new album is coming up. Is there a new album on the way?

Yes! We are about half-way into the recordings of the album and we aim to finish it now in June. We have one more single set for release this fall before we start promoting the new album. None of the two upcoming singles will be included on the new album though. We don´t want to be one of those bands that release pretty much the whole albums as singles before the album itself comes out, why not write a couple of extra songs instead.

Can you tell something about albums you released so far? Think of the titles and what they are about (is there a theme in the albums?).

The first two albums “Electric” and “Mount Egonaut” were more in the stoner/metal vein and did not have any specific lyrical themes, they were more commenting on life/society etc and other things that kept me up at nights at that time. Album no.3 “Deluminati” was the first to feature an actual theme, focusing on the darkness spreading across the world and how one could cope with that.

In 2016 we went from a four-piece to a five piece with Emil Kyrk taking over the vocal duties, this opened up many new areas where we could go musically and that led to the creation and release of “The Omega”, the album is our first concept album and it circles around a seeker, a man unsure about where his place in the world is who ends up being approached by and finding the true meaning of his life in a cult, led by the mysterious “the Omega”.

Who is responsible for the lyrics and the music?

I (Fredrik) write the majority of the music and then I and Emil share the lyrics. All members are however involved somehow in the song writing, both contributing with riffs and with the arrangements/orchestration of the songs.

What kind of music do you make?

We see ourselves somewhere in the doom-genre (meaning the more classical doom-metal sound, not the bong-smoking version)

Is your music influenced by other musicians or bands?

We have no real “template band” that we want to sound like per se, but we surely find inspiration in a lot of bands that we enjoy listening to, a couple of examples being ‘Ghost’, ‘Tribulation’, ‘Krux’, ‘Avatarium’, ‘Lucifer’, ‘Opeth’, ‘Entombed’ and many many more.

Can we call you a studio band or a real “life band”? What do you prefer?

We are first and foremost a live band, but due to a somewhat dwindling live-scene in Sweden and the economic situation most smaller touring bands now are facing we haven’t been able to tour as much as we would have wanted on “The Omega” album. I personally also very much enjoy the craft of making music in the studio, but that is not the main purpose of the band.

What was your most remarkable gig so far? And why?

I’d say when we opened for ‘Hamferð’ in Hamburg. It was a small, packed venue, fantastic sound and light and we really came through very well to the crowd that night.

Is there a tour planned? And yes are you coming to the Netherlands?

Nothing is planned at the moment, but as the album release comes closer we will surely announce some kind of tour, and the Netherlands are very much on the list of countries we will try to play in. The few times we´ve played there so far have been great so we can´t wait to come back!

Why must people listen to YOUR music or see YOU on stage?

I feel we offer a quite unique blend of Swedish metal where almost everyone can find something they like.

Where can we find the band within, let’s say, three years?

In three years we are probably hard at work with the ever so important sixth album!

Is there anything else you can and will tell us.

Thank you for listening and be sure to check out “Omens” (release Friday may 24th!!). !

Maybe you can give the links to your social media. I can put them in the article.
www.facebook.com/egonautswe
http://www.instagram.com/egonautsweden
www.egonaut.se