Exactly one year ago I introduced you the Swedish band First Revival. The band from the north of Sweden told us about the difference between the metal scene in the North and the South of Sweden. And they also told us about their EP ‘Hope Has Us Blinded’ (2017).

Now one year later they are back again. Back with a new EP called ‘Remember Me’. This EP is a rerelease from the older one from 2017. The band made a new fresh start and rerecorded the best three songs. And they release it under the name ‘Remember me”. They started the recording of the new EP in the beginning of January this year (2020). You can find a vlog from behind the scenes on YouTube. 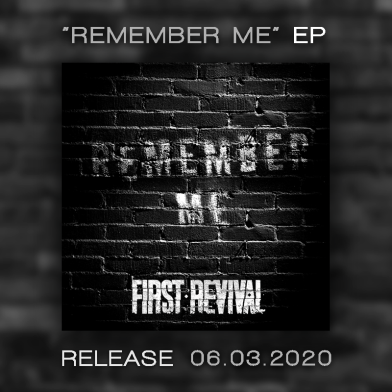 Which songs are on the album ‘Remember Me’? Simone Stålnacke will tell you all about them:

‘Sleepless’: About being unable to sleep because of whatever reason. Insomnia, anxiety or whatever you listener feels keeping you awake at night.

‘Remember Me’: About losing someone close to you.

‘Men and Mice’: About not being able to be yourself in a small town, people see you as an odd person if you don’t follow the streams (if you’re having an odd personality or different interests than the common standards), and then getting enough of the narrow people and opinions. And give the “finger’ to those who have opinions about you.

The EP ‘Remember Me’ will be released March 6.